Asteroids are mainly composed of mineral and rock, comets are composed of dust and ice. Asteroids formed closer to the sun. Meteorites are less than a meter in diameter.

Asteroids can be made of metals and therefore retain a magnetic field. The source of the field is often not known.

The asteroids travel through a background plasma, known as the solar wind. With a plasma density of about 2 particles per cc and an electron temperature of about 8 million degrees. The plasma is flowing with a speed of about 1 million Kilometers per hour.  The magnetic fields of the asteroid, if it exists, is small about a 1000 times less than the earths magnetic field, because the asteroids are small – a few hundred kilometers across for the largest.

When ions from the solar plasma pass a large magnetized asteroid they will interact with the magnetic field and gyrate with a orbit which will be a few thousand kilometers, that is an orbit greater than the radius of the asteroid.  Unlike, plasma at the earth where gyroradii are much smaller than the earth radius and the solar wind is trapped which results in the aurora, this is not possible on an asteroid.

Data calculated for the asteroid Psyche 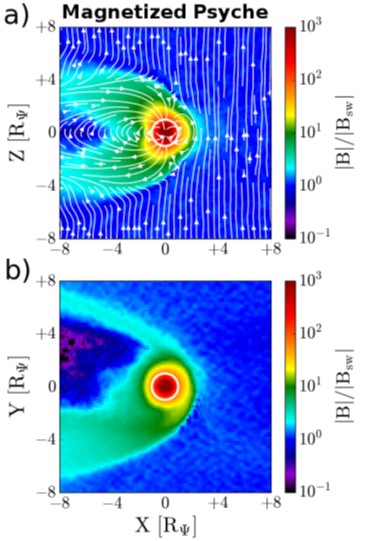