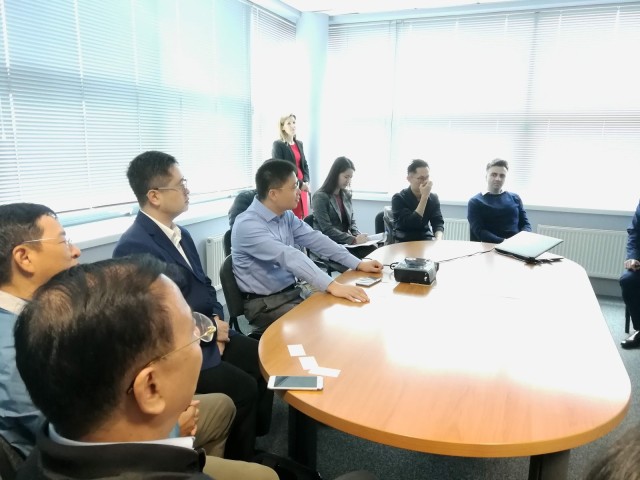 The deputy district mayor of Shenzhen, Liu Zhiyong and a delegation from the Shenzhen Financial Development Office meeting the Management Team at Impedans Ltd.

Deputy District Mayor, Liu Zhiyong, of Shenzhen also known as China’s Hardware Silicon Valley at a meeting today in Dublin, with Irish Technology Company Impedans Ltd.  The Deputy Mayor is chasing high quality technology companies to establish in Shenzhen which has grown from a population of 300,000 to over 13 Million people in the last three decades.

Liu Zhiyong, became very excited to hear that Impedans, the world’s leading plasma measurement company, has the most advanced algorithm to monitor the rapidly growing area of pulsed rf plasma and that the company can achieve data report rates in the microseconds. Impedans also revealed their product pipeline including a wireless wafer system for  ion energy uniformity measurement and smart sensors integrated into semiconductor equipment.  He was also impressed with the investors and customers who are engaged with Impedans including some Chinese firms.

“China currently manufactures a small percentage of the worlds semiconductor chips, but with the aggressive plans outlined by the Chinese government agencies that will change rapidly over the next decade.  This is an incredible opportunity for a company like Impedans” said Mike Hopkins, C.E.O of Impedans, who attended the meeting.

About Impedans Ltd:  About Impedans provide you with intelligent sensing platforms for radio-frequency (RF) and plasma process monitoring. Our products find applications in fundamental research, process development, tool design, process control and fault detection and classification (FDC). We serve a wide range of industries, due to the ubiquitous nature of RF and plasma processing, such as semiconductor, vacuum coating, medical device, hard disk and aerospace among many others. Impedans is based in Chase House, City Junction Business Park, Northern Cross, Dublin 17, D17 AK63, Ireland.